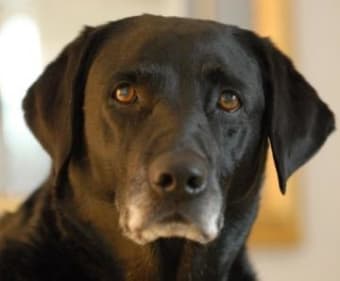 Learn all about K Laser therapy, and how it can be used to treat a broad range of conditions in dogs.

“Our dog, Bella, has always been very athletic. By just about anyone’s standards, she is in phenomenal shape for an 11-year-old dog,” said Brandi Hand. “People are always marveling at her speed and the lengths she will go to in order to fetch a ball. Even so, my husband, Tom, and I began to notice changes in her. Years of diving off of rocks into water and then having to pull herself up steep riverbanks had finally taken its toll on her. She still enjoyed our daily walks, but we noticed she was limping, and instead of being out in front of us leading the way, she was a few steps behind us. She jumped up onto our bed with ease, but she hesitated and took a very long time to jump down again. We also noticed that going up stairs was no problem, but she was having a hard time walking down the stairs.”

“We took her in to see Dr. Earley. He did a thorough physical exam and took some x-rays as well. Bella showed signs of early arthritis. Her symptoms were so mild that Dr. Earley was hesitant to put her on medication, and instead he talked to us about the K-Laser. He explained that Bella was the perfect candidate for the laser treatment. He thought her results would be good because her symptoms weren’t yet severe; she wasn’t to the point where she couldn’t walk or stand up.”

“We decided to try the K-Laser treatment and we are so glad that we did! Bella isn’t limping anymore and she’s back to all her old tricks. In fact, she feels so good that we have to be careful that she doesn’t push herself too hard,” said Brandi.

“I can’t explain how wonderful it is to see her happy and fully active again. I think it was depressing and hard on her to have to slow down so much, and now that she can run and jump without pain, I see the sparkle in her eye again. She’s such a good, sweet, loyal dog, and she deserves to feel her best for as long as she can. I am so grateful to Dr. Earley for recommending this treatment. To see the spring in her step again, and to watch her play like a puppy… Well, words truly cannot express the gratitude and joy I feel.”