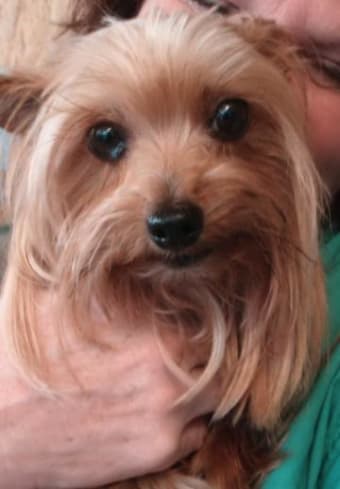 We understand it can feel scary to hear your dog needs an endoscopy. Here is a case study of how we helped Zoee, a beloved Yorkie who had swallowed a large piece of rawhide chew.

Early one morning, Zoee, a beloved 4 ½ year old Yorkie arrived as an emergency here at Animal Hospital of North Asheville. Her human mom was concerned that Zoee had possibly swallowed a large piece of a rawhide chew because she was gagging and making attempts to vomit.

After immediately assessing her and finding that she was reasonably comfortable and was stable, I ordered radiographs (x-rays) to determine if the rawhide chew was indeed lodged in her esophagus (the tube that carries food from the mouth to the stomach).

The radiographs taken of Zoee’s chest and abdomen showed that the part of the esophagus that passes through her chest cavity was dilated with air. Just over the heart, there was an elongated mass that we suspected was the stuck rawhide. To get an immediate expert opinion, the radiographs were sent via telemedicine for review by a board-certified radiologist who agreed that the rawhide was lodged in Zoee’s esophagus.

Since Zoee was not in great distress, we wanted to give the rawhide a chance to pass on its own as that would be the most economical way for her to get better. We waited two hours and radiographs of the area were repeated to see if the object had moved, but the radiographs showed the rawhide to be located in the exact same position. The most common location to see an esophageal foreign body in pets is just over the heart in the esophagus, which is where Zoee’s was located.

The most common foreign bodies found in the esophagus of dogs and cats are bones, sharp metal objects such as fish hooks and needles, rawhide chew toys, and sometimes balls. These objects lodge in the esophagus because they are too big to pass and/or they have sharp edges that become embedded in the esophageal lining. Most patients present with acute symptoms of gagging, excessive salivation, retching, loss of appetite, and/or respiratory concerns or distress.

We knew that since the material hadn't moved within a couple of hours, we would have to proceed with emergency endoscopy to remove the material and assess Zoee’s esophagus for any signs of damage. Waiting longer would be dangerous as the longer foreign material is allowed to stay in the esophagus, the more potential there is for ulceration, perforation (where the material can poke through the lining of the esophagus), and/or strictures that may later form from scarring.

A stricture that forms in the esophagus causes a band of fibrous or scar tissue that may completely or partially obstruct the esophagus.

Most esophageal foreign bodies (approximately 90%) can be successfully removed using an endoscope. An endoscope is a very expensive piece of equipment both to purchase and maintain. It requires a special expensive type of sterilization that uses ethylene oxide, which very few animal hospitals have. Here at Animal Hospital of North Asheville, we have various types of endoscopes that serve different purposes.

We can record the procedure by taking pictures and transferring them into the medical record for owners to see. The endoscope used for Zoee has controlled flexibility in that the doctor can steer it as it travels through the body. It has a flushing lens cleaner and a port for instruments including grippers, snares, cytology brushes, and biopsy forceps.

A large part of the expense from endoscopy is that the instruments are very delicate and even with the best of care, cannot be used but a few times before needing replacement. Prior to endoscopes, surgery was the only option for a patient like Zoee.

Now our patients can have an endoscopic procedure and go home two hours later and not even realize anything was done. We are always embracing any technology (endoscopy, ultrasound, digital radiology with telemedicine and laparoscopic surgery) that gives us a less invasive way to make a diagnosis or treat a condition.

Endoscopy is always the first option to see if the material swallowed is moveable – either by grasping and pulling the material back out through the mouth or pushing it into the stomach. If the object is pushed into the stomach, the decision has to be made whether it needs to be retrieved by doing abdominal surgery to open up the stomach and retrieve it or if it will be able to pass through the intestinal tract.

When the object is stuck in the part of the esophagus that is located in the chest cavity (as it was initially in Zoee’s case), a very complicated and serious surgery has to be done to open up the chest and the esophagus to get it out.

This surgery carries a very high risk of complications such as  infection and scarring of the esophagus leading to a stricture. We are very fortunate to have an endoscope and specially trained veterinarians available at the Animal Hospital of North Asheville for cases such as Zoee’s.

Without the endoscope, the only option for Zoee would have been surgery into her chest which would have cost her family more money and caused her to undergo a long recovery period with great chance of complications. Endoscopy cases are frequently referred to Animal Hospital of North Asheville from other area practices.

Our anesthesia team gave Zoee several drugs to relax her and prepare her body for anesthesia, then they placed an intravenous catheter in her front leg to give her a short acting IV anesthetic so she could have a breathing tube placed in her trachea. Once that was done Zoee was maintained on gas anesthesia for the endoscopic procedure.

Dr. Duncan passed the endoscope through her mouth into the esophagus and the foreign object was visualized on the big screen from the tiny camera in her esophagus. Dr. Duncan was able to retrieve the material with the tiny endoscopic forceps and pull it back through her mouth.

Zoee recovered uneventfully from the procedure and was discharged the same day. We were so happy that Zoee walked out with no incision and no chance of complications or discomfort from surgery.

To treat and/or prevent any discomfort from inflammation of  the lining of Zoee’s esophagus her family treated her with a medication called sucralfate for a short period and fed her soft food during that time. Mom reported dear little Zoee was doing great the next day!