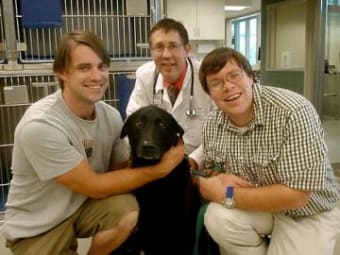 It can be very distressing when a pet has an accidental overdose. Here, our vets share the true story of a beloved lab mix to give you an idea of what to expect if your pet needs emergency care.

Through the years, I have seen many dogs who have not used good judgment about what they eat. It is so easy for accidents to happen.

Mandy, a 9 ½ year old very beloved lab mix, came in to Animal Hospital of North Asheville in the evening of June 4, 2012 as an emergency. Mandy had found a bottle of Phenobarbital tablets that had just been purchased at the drug store for Mindy, one of the other dogs in the family. Mindy takes the human drug Phenobarbital to help prevent seizures.

She has been taking Phenobarbital for many years and it has been very helpful to her in preventing seizures. Since Mindy has been on the drug so long, we have prescribed large quantities of Phenobarbital at a time so her owners don’t have to make as many trips to the pharmacy.

Unfortunately, Mandy found the bottle on the counter, got the bottle open by chewing it and ate all 360 of the 16.2 mg Phenobarbital tablets that were in the new, unopened bottle. The average dosage of Phenobarbital for a dog Mandy’s size would be 4 tablets twice daily. Mandy had eaten a ninety times overdose!

Symptoms of over dosage of Phenobarbital are ataxia (drunk acting), lethargy, sedation, recumbency (inability to stand), depression, hypothermia (decreased temperature), coma, and death. In addition, there is also a concern for damage to the liver. By the time Mandy arrived at the Animal Hospital, she already could barely stand, even though the owners had seen her eat the tablets and had brought her in immediately.

At Animal Hospital of North Asheville, we are very fortunate to have access to consultants who are available 24 hours a day 7 days a week at a Pet Poison Hotline. They can inform us of the most up-to-date treatments for specific toxicities.

I consulted with them immediately, and the poison control hotline veterinarian on duty recommended that we induce vomiting (which we had already done), and then give intravenous fluids, anesthesia to allow the stomach to be lavaged with a stomach tube, followed by giving activated charcoal via the stomach tube.

When dogs have eaten something they should not eat, we can give apomorphine, a drug that is given intravenously to induce vomiting. Fortunately, apomorphine almost always causes a dog to vomit multiple times.

Time is of the essence when we’re giving apomorphine to dogs who have eaten medications or toxins, since the longer the material is in the stomach, the more of it is absorbed.

Mandy vomited up a lot of food with the Phenobarbital tablets that were already dissolved. There was not any way to estimate how much of the Phenobarbital that she had ingested by looking at the multiple vomiting episodes, so we knew we needed to treat her for potential over dosage. We placed an IV catheter when she arrived and she immediately began receiving intravenous fluids.

Once we had induced vomiting and started IV fluids, Mandy was given intravenous propofol for anesthesia. I placed a large stomach tube into Mandy’s stomach and flushed the stomach multiple times (this is also known as “pumping the stomach”).

The first 8-10 hours were the most critical for Mandy. We have all night care for our patients with a veterinary nurse who can call the doctor at anytime during the night if there are concerns. Her vital signs were monitored very closely with a Surgivet unit that continually monitored Mandy’s blood pressure, electrocardiogram, and blood oxygen levels.

Her temperature was frequently taken to be sure she was maintaining her normal body temperature, and her respirations were observed closely. We were prepared to breathe for Mandy if she stopped being able to breathe adequately on her own. This would mean placing an endotracheal tube, putting her on oxygen, and helping her breathe with assistance. Mandy was kept on continuous IV Lactated Ringers Solution which kept her hydrated and helped her body eliminate the Phenobarbital.

Mandy remained very sedated all night and yet we were happy her vital signs remained stable. She was unaware of her surroundings throughout the night. By morning, Mandy was slightly aware and was able to raise her head a small amount.  She stayed sedated the entire next day and through the night.  Her vital signs remained stable. Early the next morning, I was thrilled to see that Mandy was able to stand for the first time and walk a few steps, though she was very wobbly.

Through the day, she was still very wobbly, but continued to improve. We performed a comprehensive blood profile and complete blood count to make sure her organ functions were remaining stable.

Thankfully, Mandy’s liver and kidney tests along with her other blood tests were normal when we sent her home in the evening of June 6, 2012. It took Mandy several more days to get back to normal, but she’s doing fine now. We are all thankful we could administer the emergency care that Mandy needed to save her life and that she has continued to do so well.