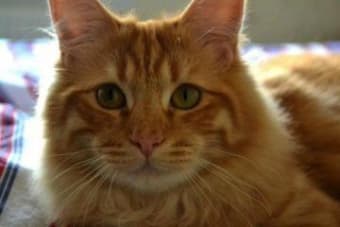 Learn about the signs and symptoms to look out for if you think your cat my have feline asthma.

Have you ever watched your cat breathe? What a silly question! But the fact is, most of us don’t really watch how our cats breathe on a regular basis. Normally, cats breathe about 20 times per minute, and their breathing is smooth, silent, and almost imperceptible unless they’re purring. When there is something wrong in the lungs, there are some changes that you can watch out for:

Coughing – cat coughs are frequently misinterpreted as attempts to “cough up a hairball.” But if you watch closely, you’ll notice that a coughing cat will crouch with his elbows out and neck extended, and make a repeated wheezing sound with no fluid produced.

Since the cough can loosen some mucous, cats may swallow or have a bubbly sound after a coughing episode. When a cat is vomiting hairballs or anything else, there is more of a retching sound and vomit is produced.

Crouched position – cats who are having trouble breathing will frequently sit in a crouched position with the elbows out, even when they’re resting. This position maximizes the amount of space the lungs have to expand.
Abdomen and chest movement – in more advanced cases of asthma or other respiratory diseases, you will see a more exaggerated movement of the chest, or you’ll see the abdomen move in and out as the cat breathes.

Asthma, also known as allergic bronchitis, is a fairly common cause of breathing difficulty in cats. It is typically very manageable. There are other serious causes of breathing difficulty in cats that don’t cause coughing, so it’s important to be aware of the other physical signs of abnormal breathing. Your veterinarian will do a thorough physical examination, and will likely do chest x-rays to determine what’s wrong.