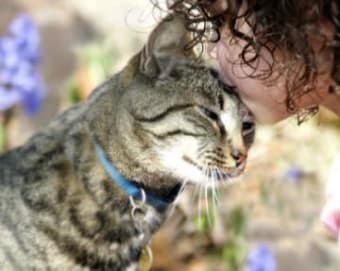 Body language, behavior, and vocalizations are keys to understanding the feline mind. You and your cat might speak different languages, but you can still communicate with each other.

The information in this article was taken from the Humane Society of the United States website, and the AAHA Healthy Pet website.

Indicators such as the look in your cat's eyes, the tone of her voice, the position of her ears, and the motion of her tail can provide important clues that reveal her feelings and intentions. You can learn to "read" these signals so you’ll get a good idea of what's on your cat's mind. 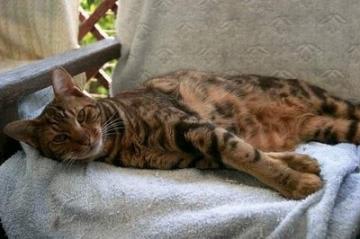 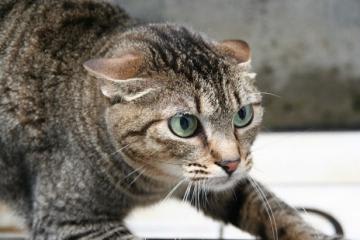 You'll learn a lot from your cat's wide vocabulary of chirps and meows. You'll know when it's time to get up (at least in your cat's opinion), when your cat is feeling affectionate, or when your cat feels threatened or is in pain.

Meow is an all-purpose word. This can be a greeting ("Hey, how ya doin'?), a command ("I want up, I want down, More food now"), an objection ("Touch me at your own risk"), an announcement ("Here's your mouse"). Some cats even walk around the house meowing to themselves.

Chirps and trills are how a mother cat tells her kittens to follow her. Kitty wants you to follow him, usually to his food bowl. If you have more than one cat, they will often converse with each other this way.

The purr is a sign of contentment. Cats purr whenever they're happy, even while they’re eating. Sometimes, however, a cat may purr when he's anxious or sick, using the purr as a way to comfort himself, like a child sucking his thumb.

Growling, hissing, and spitting indicates a cat who is annoyed, frightened, angry or aggressive. Leave this cat alone.

The yowl or howl is a loud, drawn-out meow. Your cat is in some kind of distress—stuck in a closet, looking for you, in pain. In unneutered and unspayed cats, it's part of the mating behavior (and very annoying). Elderly cats sometimes suffer from cognitive disorder (dementia) and may howl because they're disoriented. Screaming means your cat is in terrible pain.

Chattering, chittering, twittering is the strange noise your cat makes when he's sitting in the window watching birds or squirrels. Some experts think that this is an exaggeration of the "killing bite," when a cat grabs his prey by the neck and works his teeth through the bones to snap them.

A cat gets her whole body into the act when she's communicating.

Does your cat's back arch up to meet your hand when you pet her? This means she's enjoying this contact with you. Does she shrink away under your slightest touch? Save the petting for later: she's not interested right now.

Pay attention to her eyes, ears, body and tail—they're all part of the story. 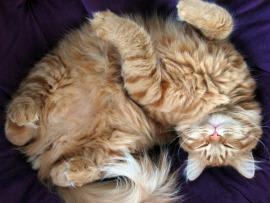 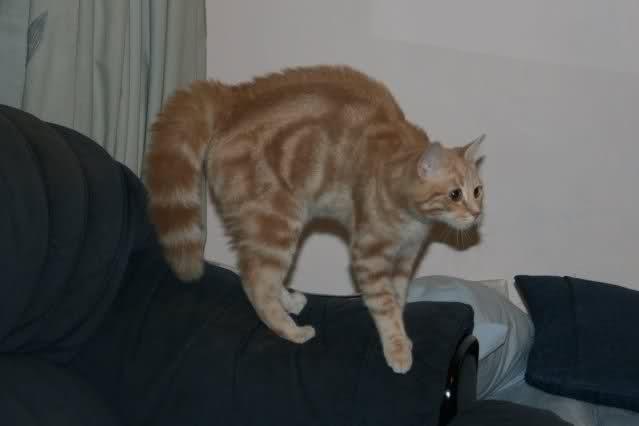 When your cat rubs her chin and body against you, she's telling you she loves you, right? Well, sort of. What she's really doing is marking her territory. You'll notice that she also rubs the chair, the door, her toys, everything in sight. She's telling everyone that this is her stuff, including you. But she does love you, too.

In the cat world, this is called "making biscuits," because the cat works her paws on a soft surface as if it she's kneading bread dough. This is a holdover from kittenhood, when a nursing kitten massaged her mother's teats to make milk flow. When your cat does this, she is really happy.

You've surely noticed times when your cat, while sniffing your shoe perhaps, lifts his head, opens his mouth slightly, curls back his lips, and squints his eyes. He's not making a statement about how your shoe smells, he's gathering more information.

Your cat's sense of smell is so important to him that he actually has an extra olfactory organ that very few other creatures have—the Jacobson's organ. It's located on the roof of his mouth behind his front teeth and is connected to the nasal cavity.

When your cat gets a whiff of something really fascinating, he opens his mouth and inhales so that the scent molecules flow over the Jacobson's organ. This intensifies the odor and provides more information about the object he's sniffing. What he does with that information, well, we'll never know.

Is your cat playing, meditating, or having a bad day? Here's how you can tell:

Playful: Ears forward, tail up, whiskers forward, pupils somewhat dilated. Playing is hunting behavior; your cat may stalk his prey (a toy, a housemate, you), then crouch down with his rear end slightly raised. A little wiggle of the butt, then … pounce! Kitty grabs his prey, bites it, wrestles it the floor, and kicks it with his hind feet. His toy is now dead.

Irritated, over-stimulated: Pupils dilating, ears turning back, tail twitching or waving. The cat may growl or put her teeth on you as a warning to cease and desist. Intense play can quickly turn to overstimulation in some cats, resulting in biting and scratching.

Nervous, anxious: Ears sideways or back, pupils dilating, tail low or tucked between legs. The cat may slink through the house close to the floor, looking for somewhere to hide.  He may turn his face to the wall to shut the world out.

Frightened, startled: Think Halloween cat. Ears back and flat against head, whiskers back, back arched, fur standing on end, tail erect or low. May yowl, growl, hiss, and spit.

Angry, aggressive: Ears back, pupils very constricted, tail up or down with fur standing on end. An aggressive cat will stare down the other cat and growl or yowl until the other cat gives way. Cats don't really want to fight; they prefer standoffs, but this can progress to fighting if one of the cats doesn't back down.