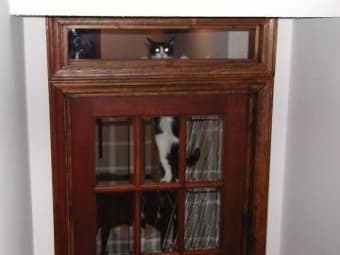 Miss Freddie is a precious 11½ year old spayed female domestic short hair cat who, despite having multiple medical problems, takes life in stride. She has chronic renal failure, diabetes mellitus, heartworm disease, and a heart murmur. Yet, in large part due to the wonderful care they give Miss Freddie, her caretakers Mary and John say that Miss Freddie is full of life.

Late last summer, Miss Freddie developed a swelling and sore under her chin (See Picture 1). It was correctly diagnosed as an abscess that may have resulted from a squabble with one of her brothers or sisters, from an infected tooth, or from another cause. The abscess was appropriately treated and she was sent home on antibiotics. The swelling improved but some irritation remained under the chin. Dr. Wootten, Miss Freddie’s primary doctor, suspected that an infected tooth was the likely cause of the swelling and she recommended Miss Freddie have a thorough dental evaluation, radiographs and treatment performed under general anesthesia. Unfortunately, a pet’s mouth cannot be fully examined, evaluated (including dental x-rays) or treated safely while they are awake.

Four months following the initial swelling, Miss Freddie’s chin swelled again and this time it wasn’t as responsive to antibiotics. Dr. Wootten explained that this chronic infection would not go away unless the underlying problem was corrected, that Miss Freddie was in discomfort, that this infection would make her diabetes more difficult to control, possibly worsen her kidney disease, and likely worsen her overall health. At this point, John and Mary decided to proceed with a dental procedure.

I had the privilege of performing Miss Freddie’s dental procedure and designed an anesthetic and treatment protocol for her that would reduce risks that anesthesia would pose for her. Miss Freddie did exceptionally well both during and after the procedure, and while Dr. Wootten and I suspected that the lower right fang tooth was the cause of her lower jaw swelling, that wasn’t the whole story.

Both of Freddie’s lower fang teeth had severe periodontal disease with gingival recession and alveolar bone loss (the bone that makes up the tooth socket) that allowed bacteria to migrate down below the gum line. This caused infection of the teeth which then abscessed into the lower jaw. (See pictures 3 and 4) The only treatment for these teeth was extraction.

Additionally, Miss Freddie had nine other teeth that were either abscessed, had severe root exposure, or had feline oral resorptive lesions that were causing her pain, discomfort, and that allowed a large amount of bacteria into her bloodstream. These additional nine teeth were also extracted.

With appropriate pain management which included local nerve blocks and narcotic pain medication, Miss Freddie recovered from the procedure comfortably and began to enthusiastically eat soft food when it was offered two hours after her procedure was complete. While most patients are released the same day of the procedure, Miss Freddie was kept overnight to be monitored by our staff all night and was discharged the following day.

While Miss Freddie only recently had her procedure completed, Mary and John report that Miss Freddie is happy, has a better appetite, and is grooming herself again (something she hadn’t done for quite a while). I suspect that Miss Freddie has many more happy years ahead of her!!

Miss Freddie demonstrates that an older cat, even one with multiple health issues, can undergo anesthesia safely and that the benefits of having a dental procedure and treatments performed can far outweigh the risks that may be involved. She is also an example of a cat that upon examination of her mouth while awake did not appear to have as many problems as were found while she was under anesthesia when a more thorough examination with dental  x-rays could be performed.

It is so rewarding to help a kitty like Miss Freddie.  Please let us help yours!

Here is a story from Freddie's owner:

This is a true story about Miss Freddie,an adult cat whom I adopted two weeks earlier from a rescue organization after all her kittens had been weaned and adopted (and she could be spayed).

I'd been really stressed at work and had been having trouble sleeping. One night I decided that I'd take a bubble bath before bed to try to relax enough to actually sleep.

Several of my other cats wander in and out of the bathroom as the tub is filling as they always do. I get in the tub while it is still filling because I'm really sore from tense muscles. Freddie happens to come along soon after and walks over to sit on the edge of the tub to say "Hi." The bubbles are rising, and at first she looks a little alarmed and starts to bat at them with her paw. She soon begins to have fun watching them scatter. However, the water level is rising as she plays and eventually she hits water instead of just bubbles. She recoils in horror -- then frantically bats the bubbles away surrounding the spot where she's reached the water in order to better see what's going on. When she realizes that there's a whole lot of water there, not just a little spot, she suddenly starts batting at me frantically, yipping and meowing in strident tones. I know from the look of panic on her face exactly what she's thinking: "Get out, get out while you still can. Don't you know there's water there? You can drown! Get out, get out. Don't you know how dangerous water is? It can kill you! Get out, get out ..."

I try to pet her and reassure her that it's Ok. The look on her face changes from panic to horror. Instead of merely batting at me, she now grabs any part of me she can reach above the bubbles (toes, fingers, arm, head) with her mouth, clamps down hard, and tries to drag me out of the tub to safety. Her meowing intensifies. She is saying under her breath quite clearly: "This is not only the biggest and ugliest kitten that I've ever seen, but also the most stupid. I can't believe it!  She won't even try to save herself!  She's just going to sit there and drown! I don't believe it! How did I manage to end up with her? She didn't seem to be that impaired when I first met her! Oh, my God, why does she have to be so BIG? I don't think that I can pull her out! What am I going to do? What am I going to do?

So, of course, I terminate my bath before it really starts, dry myself off, and give Miss Freddie a big hug. I tell her that I've had a whole lot of cats in my life, but I never had one who tried to save me from drowning before and that I'm really glad that I could be her "forever home."

And I slept very soundly that night.