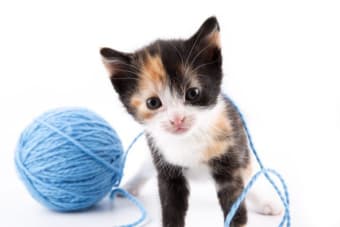 Foreign materials that are long and thin like tinsel, yarn, and string in the gastrointestinal tract are called linear foreign bodies. They are particularly troubling because of the damage they can cause to your cat.

With the holiday season rapidly approaching, homes around the world will begin to decorate using materials like tinsel and handmade macaroni garland on twine. Folks will make personalized gifts liked hand-knitted clothing. These materials – tinsel, twine, yarn, string – are all very enticing to our feline friends. Yet if ingested, they can create a potentially deadly predicament called a linear foreign. To help raise awareness of this issue, I’ve dedicated some time this week to sharing information about this important topic. Happy reading!

Linear Foreign Bodies – What are they?

A foreign body is any non-food object in the gastrointestinal tract. We all know dogs and yes, even cats, like to chew on various items. If they swallow them, they can create some major medical issues. Foreign materials that are long and thin like tinsel, yarn, and string in the gastrointestinal tract are called linear foreign bodies. They are particularly troubling because of the damage they can cause.

Why are linear foreign bodies so dangerous?

Unfortunately, these linear objects often don’t just pass in the feces. One end can become lodged at some point in the gastrointestinal tract. For our feline friends, the base of the tongue is an exceedingly common place for linear objects to get stuck. Other common places are the stomach and small intestine. Normal gastrointestinal movement (called peristalsis) tries to propel the trailing portion of the linear object through the intestines, but is unable to effectively do so because one end is lodged. The result is the intestines bunching up on themselves. In severe situations, the linear object can begin to cut into the intestinal tract due to a sawing motion, causing perforations with intestinal contents leaking in the abdomen. This condition is called peritonitis, and can be life-threatening.

Linear Foreign Bodies – How are they diagnosed?

Cats with linear foreign objects in their gastrointestinal tract can display a wide variety of clinical signs, including:

Veterinarians will obtain a complete patient history and perform a thorough physical examination. Affected cats are often dehydrated. One may be able to visualize the linear object under the tongue and/or protruding from the rectum. Veterinarians will often recommend performing abdominal radiography – using x-rays to look for evidence of a linear foreign body. These objects are not typically identifiable via x-rays, but one can often see a gas pattern in the intestinal tract consistent with obstruction. One of the classic radiographic signs is called the “string of pearls” and indicates the intestines are inappropriately bunched. Occasionally, abdominal sonography is needed to aid in the diagnosis of a linear foreign body.

Linear Foreign Bodies – How are they treated?

Cats with linear foreign bodies require surgery to remove them. Prior to surgery, veterinarians will perform blood and urine tests to evaluate the health of major organ systems. Removing the linear foreign object requires making incision (potentially multiple incisions) into the gastrointestinal tract to effectively remove it. Occasionally, a section of the intestinal tract must be removed because it has been irreparably damaged by the linear foreign object. Many primary care doctors are comfortably performing this type of surgery. If they are not, pet parents should seek out a board-certified veterinary surgeon as soon as possible.

Cats should be monitored around the clock for 48-72 hours post-operatively. They typically require appropriate pain management, nutritional support, intravenous fluid therapy, and medications to control nausea and to promote proper motility in the gastrointestinal tract. The incisions take 10-14 days to heal, so activity level must be controlled during this period.