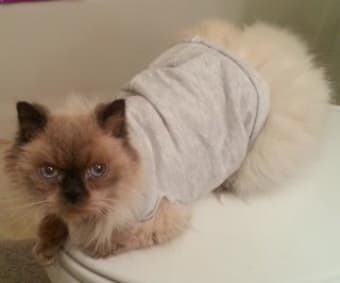 Cats are capable of having the same types of hormonal imbalances as their humans. In this case study, our vet shares the story of Jake and his journey with diabetes and Cushing's disease.

Jake is a beautiful and beloved 10 ½ year old neutered male Himalayan who has been a long term patient under the care of Dr. Plankenhorn at the Animal Hospital of North Asheville. His history over the last 7 months has shown us that we can see the same kind of hormonal imbalances in cats that we commonly see in dogs and people.

Endocrinopathies are diseases that affect the glandular organs of the body and can cause hormonal imbalance. These glands include the pancreas, the thyroid gland, the pituitary gland, and the adrenal gland.

Jake’s problems began when he started having inappropriate urination in October of 2012. He was drinking more water, and urinating outside of his litter pan.  Blood tests and a urinalysis were consistent with early Diabetes.

Diabetes mellitus (sometimes known as sugar diabetes) is a commonly diagnosed disease in cats and ultimately can affect multiple organs. It occurs due to inadequate production of insulin by the beta cells in the pancreas or a resistance by the body to insulin.

Insulin is secreted directly into the circulation and enables glucose or sugar to enter the cells where it is metabolized for energy. Without insulin, the cells cannot utilize glucose and elevated blood sugar levels result. In diabetic cats, this excessive amount of glucose is eliminated by the kidneys, which results in thirst and more frequent urination.

Diagnostic testing for diabetes includes testing for hyperglycemia (elevated blood sugar levels), and glucose or sugar in the urine. Because cats can experience elevated blood sugar due to stress, we sometimes use a blood Fructosamine level to tell the difference between a stress-induced high blood glucose level and a more persistent elevation as occurs in diabetes. Fructosamine testing gives an “average” glucose reading over the previous two weeks, rather than at a single point in time.

Dietary management and daily injections of insulin help to regulate most diabetic cats. Recent research has shown that the ideal diet for diabetic cats is a high-protein, low-carbohydrate diet as cats primarily metabolize protein, not carbohydrates, for glucose.

Occasionally, an overweight diabetic cat may respond to dietary management alone and not require insulin to keep the blood glucose well controlled.  Jake was started on this type of diet in October when he was diagnosed, and while it worked for a while, his blood glucose levels were not well controlled and he was started on Lantus Insulin injections in February 2013.

Most cats need one or two injections a day depending on the type of insulin and their blood sugar levels.  Fortunately, the amounts are very small, the needles are tiny, and most cats do not react to the injections. Jake tolerates his insulin injections very well.

Blood glucose tests are then utilized to track how well the cat is responding to the insulin and how much will be needed. This testing can be performed in the hospital, or families can be taught how to obtain blood samples at home (commonly doing an ear prick) and check glucose level using a home glucose monitor for pets.

Jake seemed to be responding well to the insulin over the next 3 months, however, he started developing skin irritation that we did not believe was associated with his diabetes. He was brought in for examination by Dr. Wootten and was treated symptomatically with an appropriate course of antibiotic therapy and topical medication, but the skin condition continued to worsen.

Jake then started having unexplained weight loss and progression of the skin changes that included non-healing sores, seborrhea (flaking skin), patchy hair loss, and thinning of the skin.  Dr. Wootten and Dr. Plankenhorn collaborated on Jake’s condition and after performing further tests diagnosed Jake with an additional endocrinopathy or glandular organ problem, hyperadrenocorticism.

Hyperadrenocorticism, or Cushing’s disease, is a disease caused by increased circulating cortisol levels in the body. The paired adrenal glands normally produce and store cortisol which is released in times of stress and allows the body to respond appropriately (“fight or flight” hormone).

In a healthy pet, the pituitary gland (located at the base of the brain) secretes a hormone called ACTH that stimulates the adrenal gland to secrete normal amounts of cortisol.  In Cushing’s disease, this controlling mechanism is lost because there is either increased ACTH hormone from the pituitary gland (Pituitary dependent Cushing’s disease), or excessive amounts of cortisol released from the adrenal gland (primary adrenal tumor).

Excessive cortisol levels in cats can cause many symptoms including increased thirst and urination, weight loss or weight gain, enlarged liver, curled ear tips, weakness, and skin changes as we were seeing in Jake.

A complete blood count and biochemistry profile were repeated on Jake at this time. While dogs with Cushing’s disease have some characteristic abnormalities on screening blood tests, cats frequently do not.  Jake’s tests were overall normal except for his diabetes, but we knew there was more wrong with him.

Diagnostic imaging with ultrasound was performed next. Naturally occurring Cushing’s disease is uncommon in cats, but when it occurs, 85% will have the pituitary dependent form and a small percentage will have an adrenal tumor that secretes too much cortisol.

Adrenal tumors or enlargement cannot typically be seen on radiographs. Ultrasonography by an experienced veterinarian can be used to evaluate changes in adrenal size and shape. In Jake’s case, enlargement of the right adrenal gland was found by Dr. Earley.

In order to confirm the suspected diagnosis of Cushing’s disease, additional blood testing called a Low Dose Dexamethasone Suppression test was performed. This is a common screening test for Cushing’s disease in both dogs and cats.

The pet is fasted overnight, a baseline blood sample is taken, a small amount of dexamethasone is administered intravenously, and 2 additional blood samples are taken 4 and 8 hours later. In normal animals, the injection of dexamethasone tells the pituitary and adrenal glands to stop making cortisol for a while, and the blood level goes down.

If the cortisol levels are not adequately suppressed on the test, it is supportive of the diagnosis. Jake’s blood test results showed no effect from the injection, which supported the diagnosis of Cushing’s. Approximately 80-90% of feline patients diagnosed with Cushing’s disease have concurrent diabetes because cortisol interferes with the effects of insulin in the body.  Successful treatment of Cushing’s disease is aimed at control of the symptoms the patient has and management of the concurrent diabetes.

Since his diagnosis, Jake has been taking a medication called Trilostane to help manage the excessive cortisol levels in his body.  The most common physical examination findings in feline patients with Cushing’s disease are skin related.

One of the more serious complications includes Feline Fragile Skin Syndrome where the skin is extremely thin, and can be torn or bruised easily making them more prone to secondary skin infections. Jake has been treated with antibiotic therapy and pain management for this particular complication. He proudly wears his “muscle shirt” at home to protect his fragile skin from trauma.

It may take weeks to completely respond to the medical treatment of Cushing’s disease, but he already has more energy and is gaining weight.  We are all hoping that Jake has a successful outcome with treatment!