Warning Signs Your Pet Is Sick 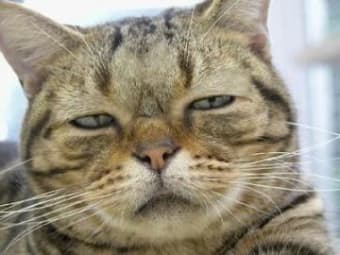 How many times have you had a pet who’s just not acting right, or vomiting, or showing different eating or drinking patterns, and you’ve wondered whether or not to worry?

Our pets can’t talk to us, so we have a greater challenge determining whether a problem is just a temporary bad day or whether it’s something more serious.

At Animal Hospital of North Asheville, we understand how difficult it can be to interpret changes in your pet, and we’re always here to help. The following article from WebMD Pets is a good guideline to help you decide when to pursue veterinary care for your pet. But remember, you know your pet better than anyone, so if you feel there’s something wrong, please call us! We understand that symptoms can be subtle at times, and we’d rather catch a problem early than wait until things are more serious.

What our sick pets can’t say in words, they’ll demonstrate through physical symptoms and behavior changes.

Monty's behavior mystified his owner, Karen Mitchell. The 7-year-old dog -- a mix of pit bull, boxer, and pointer -- was long housebroken and rarely had indoor accidents.

So when Monty began urinating in odd places, Mitchell, 43, at first attributed the dog's behavior to the stress of big life changes. Mitchell and her husband had recently welcomed a new baby daughter and had moved into a new house in Alameda, Calif.

But when the urinating didn't stop, a worried Mitchell finally took Monty to the veterinarian after he wet himself during sleep. "He actually slept in his pee," she says. "He wasn't acting out by peeing in the corner because he's mad that we moved. This was definitely a sickness."

What our sick pets can't say in words, they'll demonstrate through physical symptoms and behavior changes.

"Dogs and cats can't tell us when something hurts or doesn't feel good. But the owners that see them every day will realize when they're not just being their regular selves," says Mark Stickney, DVM, director of general surgery services at Texas A&M University College of Veterinary Medicine and Biomedical Sciences. "Any change in your pet's behavior from what it normally does is a reason to see your veterinarian."

Pay special attention to cat health, says Julie Meadows, DVM, assistant professor for clinical medicine in community practice at the University of California-Davis Veterinary Medical Teaching Hospital. Cats are less likely to show owners that they're sick, and owners may be less attentive to them because they are more independent.

To help you know what to look for, WebMD asked several experts to provide six "red flags" that should prompt a call or visit to the veterinarian about your pet's health. And as always, if you are concerned about anything at all, reach out to your vet.

Cats and dogs vomit on occasion, often without being seriously ill. "A puppy who's eating and playful and has been outside eating leaves and junk and vomits and then goes back about his life" doesn’t worry Meadows much, she says.

But a pet that vomits, especially several times in one day, acts lethargic, and lacks appetite needs a veterinarian's attention, according to experts.

Another serious pet symptom: blood in the vomit or throwing up digested blood that looks like coffee grounds. Gastric ulcers can cause bloody vomit, and so can swallowing a foreign object that irritates the stomach. Veterinarians tell WebMD that they have treated dogs and cats that have gulped down sharp bones, socks, underwear, mittens, towels, string, tinsel, corn cobs, fish hooks, and toy soldiers.

"I had a dog swallow a steak knife right off the table, like a sword swallow," says Sandra Sawchuk, DVM, clinical instructor at the University of Wisconsin-Madison School of Veterinary Medicine.

Vomiting or diarrhea can stem from many other causes, too, including gastrointestinal illnesses or parasite infections that include hookworms, roundworms, whipworms, or giardia, Stickney says.

Blood in the stool is also a warning sign that a pet needs to see the vet.

To prevent human exposure to parasites, such as hookworms and roundworms, Meadows suggests regular de-worming of pets. That's especially important if anyone in the household has a weakened immune system, such as from cancer or AIDS, or if small children play in areas where pets defecate.

Lack of Appetite or Decreased Activity

These two pet symptoms are vague, but if they persist, a veterinarian should check for causes. Dogs and cats stop eating for a host of reasons, including fever, pain, or stress. "A reduced or absent appetite, especially if it lasts for more than 24 hours, is a reason to bring your animal to the veterinarian," says John Randolph, DVM, diplomate of the American College of Veterinary Internal Medicine and professor of medicine at Cornell University’s College of Veterinary Medicine.

Typically, cats suffer more dire consequences when they stop eating, according to Sawchuk. "A dog may be a picky little snit and doesn't eat his dinner because he's waiting for human food," she says. "With cats, you've got to be real careful because if they just even go a couple of days without eating, especially an overweight cat, they can develop fatty liver." In this potentially fatal disease, excessive accumulation of fat in the liver can cause liver failure. A cat that stops eating should see a vet promptly because fatty liver needs to be treated immediately.

What about this pet symptom: the cat or dog whose energy level drops? "It's just one of those very vague things that tell us that something is not right," Sawchuk says. Many things can cause lethargy, including major problems, such as heart disease.

A pet whose lethargy can't be pinned on an obvious reason, such as from an extra-long run at the dog park, may need to visit the vet, especially if other symptoms arise, such as change in exercise tolerance, weakness, collapse, or loss of consciousness.

As Mitchell discovered with Monty, excessive thirst and urination might spell diabetes. But increased urination may also signal liver or kidney disease or adrenal gland disease.'

With increased urination, housebroken pets might start wetting inside the house. Or a dog that usually sleeps through the night suddenly needs nocturnal bathroom trips, Meadows says. An owner might notice, too, that he or she is filling the water bowl more often.

In contrast, too little urination, or straining to urinate, often signals a urinary tract problem or bladder stones. These are urgent reasons, especially for cats, to see the vet.

"Cats can get an accumulation of crystals in the bladder or stones in the bladder that create bladder inflammation and can cause blood in the urine," Meadows says.'In male cats, crystals or inflammatory debris can plug up the urethra so that the cat can't urinate, which can become life-threatening within 24 hours.

"It's a hard thing to pick up because the only thing you might see is the cat making multiple trips to the litter box and just sitting there," Meadows says. Or cats that strain to urinate might change their habits and start urinating outside of their litter box, for example, into the sink or on bedding and furniture.

Sawchuk, who lives in Wisconsin, says that with the first snowfall, many people will report that their dogs have bloody urine. The problem may have existed for a while, but the owners didn’t notice, Sawchuk says. "And now, [the urine] is in the snow and it’s pink, so we get a lot of phone calls."

"Coughing, especially if it's persistent, is one of those pet symptoms that need to be evaluated," Sawchuk says. Chronic coughing may be related to heart disease, heartworms, or lung diseases.

Or a dog may have kennel cough, an infectious tracheobronchitis that causes a harsh, hacking cough. For most dogs, kennel cough is mild -- a nuisance that goes away within two weeks, Sawchuk says. But for puppies, kennel cough can progress to fatal pneumonia.

Also, kennel cough may be more serious for dog breeds with pushed-in faces, such as boxers, bulldogs, pugs, and Boston terriers, Sawchuk says. Their unusual head anatomy can compromise their respiratory systems and create breathing difficulties.

If a puppy or dog with kennel cough develops more serious symptoms, such as fever, nasal discharge, loss of appetite, lethargy, or a productive cough, it may be getting pneumonia.

While any lasting cough should come to a veterinarian's attention, owners can also take protective measures by vaccinating their dogs against some of the organisms that cause kennel cough.

Owners should also tell a vet about persistent sneezing or discharge from the eyes, ears or nose. Also, "any animal that has difficulty breathing, rapid breathing, or choking -- those are all reasons to seek veterinary help," Randolph says.

Fleas, ticks, mange mites, and ear mites are common reasons for hair loss and itching on the skin or around the ears. When cats or dogs have ear mites or yeast infections, they may scratch at itching ears and have "brown, crumbly discharge in the ears," Sawchuk says.

But hair loss or itchy skin may also result from endocrine problems, staph infections, fungal or yeast infections, and a host of other causes, Sawchuk says. "We make our diagnosis by sometimes collecting samples of hair and the superficial debris on the skin," she adds, "or sometimes doing laboratory testing to look for hormonal problems or culturing if we're worried about fungal infections and things like that."

Stiffness, Lameness, or Difficulty With Rising

Pets that suffer stiffness, lameness, inability to bear weight on one leg, or trouble rising from the ground may have hip or spine arthritis, disc disease, ruptured ligaments, or hip dysplasia. Tick-borne diseases, such as Lyme disease, can also cause arthritis.

In hip dysplasia, the hip joint develops abnormally, leading to degenerative joint disease. Big dogs, such as German shepherds, Labradors, and golden retrievers, are more likely to be affected. "The larger dogs tend to have more problems with inherited joint problems, like hip dysplasia and shoulder and elbow dysplasia that can result in them developing arthritis as they age," Sawchuk says. "A lot of little dogs also will get arthritis, but because they tend to be carried around a little more and pampered and not asked to do the same things that large dogs are, it may not be quite as evident to the owner."

Besides pain and stiffness, arthritis can result in other nasty consequences. For example, long-haired dogs that are unable to get up may urinate on themselves and end up with maggot infestations in their fur during warm weather, Meadows says.

When a dog has trouble getting up from the ground "it's one of those things that families just accept as a sign of aging," Meadows says. But "we know dogs get arthritis in their knees, hips, and lower back, and we have so many tools to manage that and keep the quality of their life and the quality of their mobility really excellent."

Treatments range from glucosamine and NSAIDs to exercise, physical therapy, and surgery.