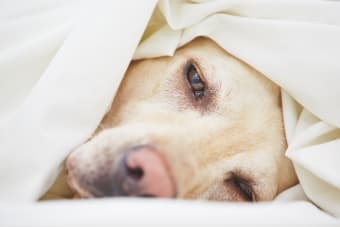 Ticks can carry and transmit several diseases that can cause serious illness or death. Today, learn about tick-borne diseases in dogs, symptoms, and your options for prevention and treatment.

What are tick-borne diseases in dogs?

Ticks are blood-sucking intracellular parasites that introduce dangerous bacteria to dog’s bodies, live inside their cells and cause thousands of pooches to become ill every year.

They can also suffer long-term damage from the resulting conditions, which can be serious and even fatal. For these reasons, it’s imperative to prevent tick-borne illnesses and have symptoms treated early if your dog does contract a condition. These are the most common tick-borne diseases in dogs throughout the United States:

Lyme disease is a quickly growing global issue. Transmitted by deer ticks or black-legged ticks, the bacteria borrelia burgdorferi causes the disease. Symptoms may include limping, enlarged lymph nodes, swelling or pain in the joints, lameness, fever and lethargy.

While this may be one of the less common blood-borne diseases in dogs, it still causes deeply concerning symptoms that include lameness and fever. Left untreated, the condition can lead to heart or liver disease. It may also infect people. Canine bartonellosis is transmitted by the brown dog tick.

Because it can be difficult to interpret diagnostic test results, several rounds of treatment and many tests may be needed before your vet is able to make a definitive diagnosis if your dog has a severe case.

Many types of ticks can transmit canine ehrlichiosis, including the lone star tick, American dog tick and brown dog tick. The disease is found worldwide.

Symptoms begin to appear between 1 and 3 weeks after an infected tick bites your dog. Signs may include poor appetite, fever and low blood platelets (cells that help blood to clot). You may also notice nose bleeds or bruising.

While dogs diagnosed with canine ehrlichiosis early may have better treatment outcomes, recovery may be more difficult if chronic symptoms develop as a result of the disease.

Also known as dog fever or dog tick fever, this disease is carried by the deer tick and can cause symptoms similar to other tick-borne diseases, ranging from loss of appetite, stiff joints, fever and lethargy to vomiting and diarrhea. Extreme cases can lead to seizures.

RMSF is carried by the American dog tick, brown deer tick and Rocky Mountain wood tick. The disease is found throughout North, South and Central America and is one of the more commonly recognized tick-borne diseases. It can infect both dogs and people.

These diseases originate from a protozoal intracellular parasite that lives in your dog’s red blood cells. These include:

Your pooch can pick up this tick-borne disease by ingesting protozoa, which can happen when your dog eats infected animals such as birds or rodents. This makes it different from other tick-borne illnesses.

Though tick bites (typically from the American dog tick and/or brown dog tick) are primarily to blame for this disease, it may also be transferred through transplacental transmission and contaminated IV blood.

The breakdown of red blood cells can lead to symptoms such as pale gums, lethargy, jaundice (yellow or orange-colored skin or whites of eyes) and dark-colored urine. Other symptoms may include weakness and vomiting.

How can tick-borne diseases affect a dog’s immune system?

Once they enter your dog’s body, these tiny organisms can get into the cells and hijack your pooch’s immune system. These organisms can lead to chronic infections as they help each other survive inside your pet’s body, where a number of tissues and organs can become infected and inflamed.

Though this can result in a wide range of symptoms, the signs discussed above may not appear until weeks or months after your dog is bitten as disease hides in inflamed tissue.

What other symptoms should I look for?

The hallmark symptoms of most tick-borne illnesses include lethargy, fever, vomiting, swelling around joints, and lameness. Other signs can include:

How are tick-borne illnesses in dogs treated?

When it comes to tick-borne illnesses, early diagnosis and successful treatment are critical. Your vet may prescribe a number of broad-spectrum antibiotics in the early stages of the disease, with the caveat that they also destroy beneficial bacteria as well as the bad bacteria.

This issue can be addressed by providing probiotics to your dog to prevent gastrointestinal issues from cropping up, and following your vet’s recommended treatment plan.

It can be difficult to control or eradicate recurring tick diseases. If your dog recovers, she will still need regular blood work to detect any recurrences. Ask your vet about how to control ticks.

How can I prevent my dog from contracting a tick-borne disease?

At Animal Hospital of North Asheville, we offer a full line of parasite prevention products to protect your pet from ticks and other parasites.

However, remember that no method is 100% effective, so always be diligent when considering outings, apply tick control treatments before taking your dog to environments where ticks may thrive, and check your pooch for ticks when you arrive home.

During tick season (which lasts through spring, summer and fall, and year-round in warm climates), check your dog for ticks. They are typically black or dark brown in color, and can transmit diseases within 3 to 6 hours of biting your pooch.

If you discover a tick, it should be removed quickly to prevent infection. Consider bringing your dog to our animal hospital, where a vet can safely remove it.

Note: The advice provided in this post is intended for informational purposes and does not constitute medical advice regarding pets. For an accurate diagnosis of your pet's condition, please make an appointment with your vet.

Do you think your dog is experiencing symptoms related to a tick-borne disease? Contact our team of compassionate veterinarians at Animal Hospital of North Asheville today, to book an appointment your canine friend.